Midst-life *risis is not an event, it’s a process… In the spirit of ch-ch-changes, I decided to follow a fab pocket book “101 solutions to get out of crisis” by Alexander Rios, a Madrid-based artist. How hard/fun can it be?! I’ve already cut “crisis” out of my vocab, said no to credit cards and danced every morning! 😉

On a lovely Berlin weekend, I took this idea to heart and decided to visit streets and landmarks dedicated to ten of the most notable German thinkers. It made for a great self-guided tour into nooks and crannies of the city I hadn’t yet discovered.

A surprisingly uneventful residential street and a quiet park with a statue of Albert and his younger self… So cute! Einstein is no social media slouch with nearly 700K followers on Instagram and a lucrative merchandising deal. Ca$h ain’t relative, ha?!

…so much so that the official institution charged with promotion of German language and Germanic culture worldwide bears his name: Goethe Institute. What would an organization named after YOU be working on? Timbul Institute will probably house rosé wine cellars, run eggplant recipe contests and curate an archive of oral sex jokes.

Apparently, Immanuel said just about everything the West was founded upon, and this: “One who is cruel to animals becomes hard also in dealings with people. We can judge the heart of a person by their treatment of animals.” Of course, he said he. Gender wasn’t neutral back then. However, I could subscribe to such veggielosophy! #VeganKant

A unit of electromagnetic something is called a hertz. What could your name be a measure of? A timbul equals dream to heartbreak ratio multiplied by frequent traveler miles. Coincidentally, electromagnetism is also how all my exes describe my personality.

The man wrote Das Kapital and then said: “History repeats itself; first as tragedy, second as farce.” Wait. The present state of kapitalism… are we in the tragedy or already onto the farce part? Moreover, what comes next?! Asking for a German friend.

Friedrich co-wrote the Communist Manifesto with his bff Karl, but Marx had a better beard. Like, top Santa level. History judged them accordingly. Karl got a subway stop while Friedrich waits for the tram. Moral of the manifesto: trim your facial hair. 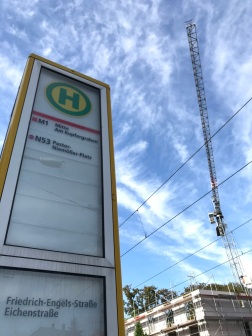 Gottfried Wilhelm Leibniz is famous for having the most German name ever. Also, stuff about differential and integral calculus. Wikipedia said, polymath. I thought it was a type of math. No, it’s a noun: “a person of wide knowledge or learning.” I am not a polymath. Luckily, Leibniz also invented mechanical calculators!

Georg Wilhelm Friedrich Hegel came in a very close second in that most German name contest. He also came up with the thesis, antithesis, synthesis concept that governs our experiential expectations to this day: from Bond films to bad relationships to blog posts. It’s a Hegel World. We’re just (in)consequential subsequent phenomena in it.

Exhausted from all the running around and overwhelmed by the realization how much of our thinking today is predetermined by a few German white men, I needed to balance it out. So I went to the David Hasselhoff Museum, inexplicably appropriately located in the basement of a hostel that is also a brewery. The Hoff performed at the fallen Berlin Wall in 1989 and fought a Sharknado in outer space in 2015. I was happy to pay my dues.

I look forward to the rest of ideas! Meanwhile, here’s Alexander Rios’s other work!